The 50 Greatest Shower Thoughts of All Time

“In the shower, with the hot water coming down, you’ve left the real world behind, and very frequently things open up for you.” -Woody Allen 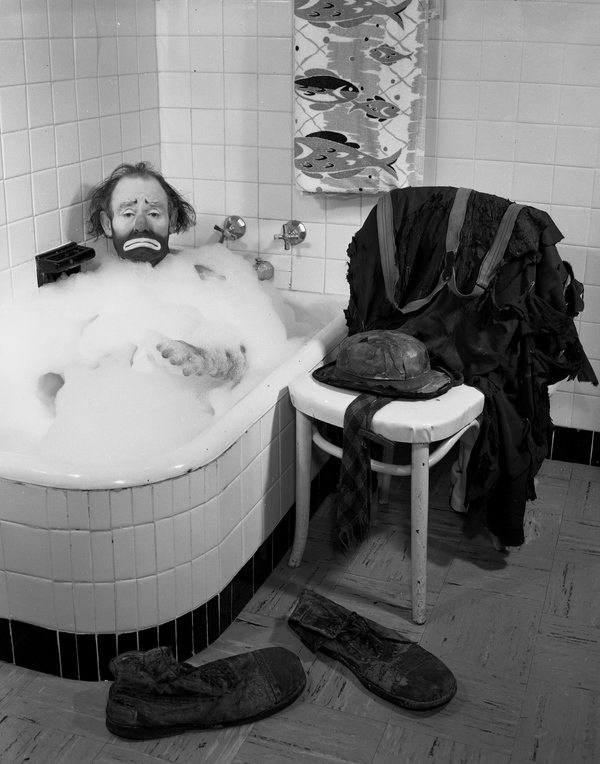 A Clown in a Shower Bath by Emmett Kelly

We have to stop apologizing for our “stupid” ideas.  Too often in the creative industry do we hear, “This might be a stupid idea, but…”.  Stop it.  The best ideas stem from nonsense and aha! moments that frequently come from drunken rants, sarcastic shit-shooting, and our favorite: shower thoughts.  In honor of all of our stupid ideas, we’ve curated a list from reddit of the greatest shower thoughts of all time.

The 50 Greatest Shower Thoughts of All Time

1. “Waterboarding at Guantanamo Bay sounds super rad if you don’t know what either of those things are.”

2. “Maybe ‘Are You Smarter Than a 5th Grader?’ isn’t a show that displays how stupid grown adults can be, but rather, a show that depicts how much useless information we teach grade schoolers that won’t be retained or applicable later in life.”

3. “X88B88 looks like the word voodoo reflecting off of itself.”

4. “Go to bed, you’ll feel better in the morning” is the human version of “Did you turn it off and turn it back on again?”

5. “The sinking of the Titanic must have been a miracle to the lobsters in the kitchen.”

6. “The person who would proof read Hitler’s speeches was a grammar Nazi.”

7. “When Sweden is playing Denmark, it is SWE-DEN. The remaining letters, not used, is DEN-MARK.”

9. “When you drink alcohol you are just borrowing happiness from tomorrow.”

10. “The Google self-driving car should have an “I’m Feeling Lucky” button that drives you to a random location.”

11. “As a dishwasher, I come home after hours of work in which I get covered in filth, and I take a shower only to realize…I am the final dish.”

13. “Your shadow is a confirmation that light has traveled nearly 93 million miles unobstructed, only to be deprived of reaching the ground in the final few feet thanks to you.”

14. “Instead of all the prequel and sequel movies coming out, they should start making equels – films shot in the same time period as the original film, but from an entirely different perspective.”

15. “Thanks to the Internet, I have probably seen more naked ladies than all of my ancestors combined.”

16. “I wish I had a Mario Kart-like ghost of myself punctually getting ready for work in the morning so I’d know if I was running late.”

17. “If Obama was the president of Kenya, he would be their first white president.”

18. “Apple has ‘air.’ Amazon has ‘fire.’ Google has ‘earth.’ I think Microsoft should create something called ‘water.'”

19. “If Katniss and Peeta from “Hunger Games” were Hollywood celebrities, their supercouple nickname would either be Katpee or Peeniss.”

20. “The iconic Alien is to us what we are to apes: small, pale, big headed, and with unfathomable technology. We even abduct them for medical experiments.”

21. “Trying to get rich by playing the lottery is like trying to commit suicide by flying on commercial airlines.”

22. “They should announce a sequel to Groundhog Day and then just re-release the original.”

23. “Being attracted to your own flacid penis would be the worst fetish ever.”

24. “I wonder if my dog always follows me into the bathroom when I have to go potty because I always follow him outside when he does and he just thinks that’s how it works.”

25. “I didn’t exist in your world until you started reading this sentence of mine.”

26. “We should have a holiday called Space Day, where lights are to be shut off for at least an hour at night to reduce light pollution, so we can see the galaxy.”

27. “The word ‘Fat’ just looks like someone took a bite out of the first letter of the word ‘Eat’.”

28. “The real unsung hero in School Of Rock is the promoter who got about 2,000 people to a local Battle Of The Bands on a weekday morning.”

29. “The idea of a ghost that moans may have been started by children whose parents were having sex in the adjacent room and denied having heard the sounds.”

31. “For most of human history, vehicles had automatic collision avoidance and could even take you home when you were sleeping or drunk. Then we got rid of the horse.”

32. “Your stomach thinks all potato is mashed.”

33. “Google maps should have a ‘on the way’ feature to find the most convenient gas station, Starbucks, or whatever along the route to your destination.”

34. “The witches from Sabrina having a cat called Salem is like a Jewish family with a cat called Auschwitz.”

36. “Me not being able to watch “The Interview” is the first real time I’ve ever directly been affected by North Korea.”

37. “If you’re no longer covered by your parent’s health insurance, your manufacturer’s warranty is over.”

38. “I should ask my barber where he gets his hair cut, then go there and slowly make my way up the chain until I find THE GREATEST BARBER IN THE WORLD…or perhaps just a bald dude.”

39. “What if every country has ninjas, but we only know about the Japanese ones because they’re rubbish?”

40. “If you would mount garbage trucks with camera’s you could weekly update google maps street view.”

41. “Gorillas don’t know any bodybuilding techniques so we have probably never seen one at full potential.”

43. “Everyday, someone on Earth unknowingly does the biggest poo in the world for that day.”

44. “When a pregnant woman swims, she is a human submarine.”

45. “During childhood, we are told that jokes about the genital areas are adult content, but once we become adults, these jokes are considered ‘childish’.”

47. “Most teenagers pull their phones out of their pockets to check the time. We are reverting to the era of pocket watches.”

48. “Seeing as how both Batman and Ironman’s only real super powers are that they are super rich and very smart, Bill Gates and Steve Jobs sure turned out to be disappointments.”

49. “If I touch my phone in the right places, a pizza will show up at my front door.”

50. “Adblock should buy out signs around time square and replace them with ‘This ad has been blocked by Adblock’.”